Massive response effort underway in the Philippines for Typhoon Haiyan

Destruction caused by Super Typoon Haiyan (Yolanda) has galvanized the international community in a massive disaster response operation with many logistical issues. Despite the influx of humanitarian assistance, blocked roads and destroyed infrastructure have made it challenging to reach the hardest hit areas. The extensive damage has slowed the assessment and debris removal process delaying the movement of aid.

To aid the communities involved in the relief and response efforts, PDC is currently developing damage maps based on official updates from the Philippines NDRRMC. Many of these maps are widely disseminated to the humanitarian community by ReliefWeb, a service provided by the UN-OCHA and is being shared through social media and via PDC’s DisasterAWARE platform.

Satellite imagery is being made available, as part of the International Charter, a global collaboration to provide rapid access to satellite data for natural and technological disasters. PDC has been designated as the project manager for the Philippines charter activation.

In addition, the Hawaii National Guard (HING) is the Philippines’ state partner through the U.S. National Guard’s State Partnership Program (SPP). PDC has been providing direct support to HING, as well as the Oregon National Guard, who is state partners with Vietnam, which was also impacted by the typhoon.

PDC activated before the storm made landfall, taking steps to increase the overall situational awareness of the potential impact of Haiyan. The Center has remained actively involved with U.S. and Philippine responding agencies, civil and military, as well as with international humanitarian organizations. PDC will continue to support response agencies as this disaster unfolds. If you are an emergency manager, and would like access to DisasterAWARE through EMOPS, click here for more information. 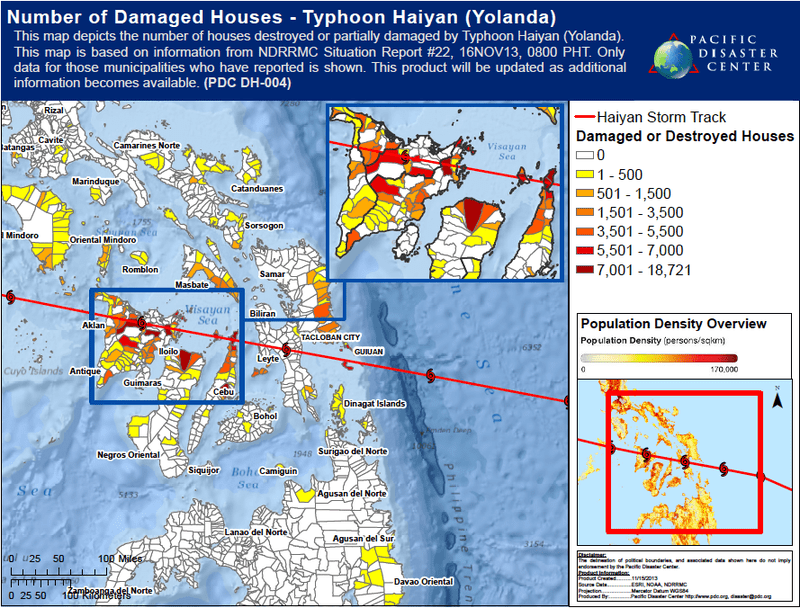