Extensive damages were sustained following the strong 7.8M earthquake in Nepal that violently shook the densely populated Kathmandu Valley and surrounding areas at 06:11 UTC yesterday (25 April). Urban search and rescue is still underway, as civilian and government agencies, along with volunteers on the ground, work quickly to free those trapped beneath the rubble and debris. Officials are currently reporting nearly 1200 deaths, according to AFP. There is additional concern for those residing in rural areas surrounding Kathmandu.

Nepal straddles the Himalaya mountain range between India and China, and is home to the world’s tallest mountain, Mt. Everest. The large earthquake also triggered an avalanche in the area where many hikers and climbers have gathered for the beginning of the annual climbing season. At least 10 people have been reported killed, according to AFP.

Pacific Disaster Center (PDC) activated immediately following the earthquake, taking steps to increase the overall situational awareness of the impact. PDC has supported various efforts to advance effective coordination and communication and the development of risk reduction initiatives in Nepal. Past efforts include work with the Nepalese Ministry of Home Affairs (MoHA), which is a National Focal Point of Disaster Management in Nepal, as well as MOHA National Emergency Operations Center (NEOC), the Nepalese military, and the U.S. Embassy in Nepal.

PDC Director of Humanitarian Programs Peter Colvin left Kathmandu on April 23, following a Data Sharing Workshop, which is part of a multi year U.S. Army Corps of Engineers (USACE) initiative to better utilize static and dynamic data to increase the region’s resilience and response to natural hazards. This project has included a Disaster Response Plan exercise conducted at Nepal’s airport in 2014. Colvin and other PDC team members continue to work with in country partners to address the situation, identify data availability, and support response needs. This includes examining scenario maps from past exercises, and analyzing data on regional transportation, coping capacity, or vulnerability.

The Center will remain actively involved with responding agencies, civil and military, as well as with international humanitarian organizations, as this disaster unfolds. If you are an emergency manager, and would like access to DisasterAWARE through EMOPS, click here for more information. 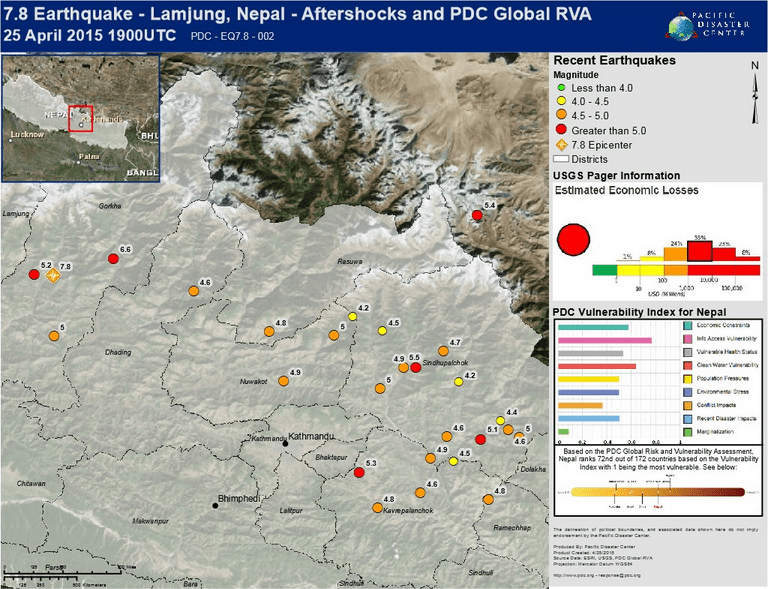