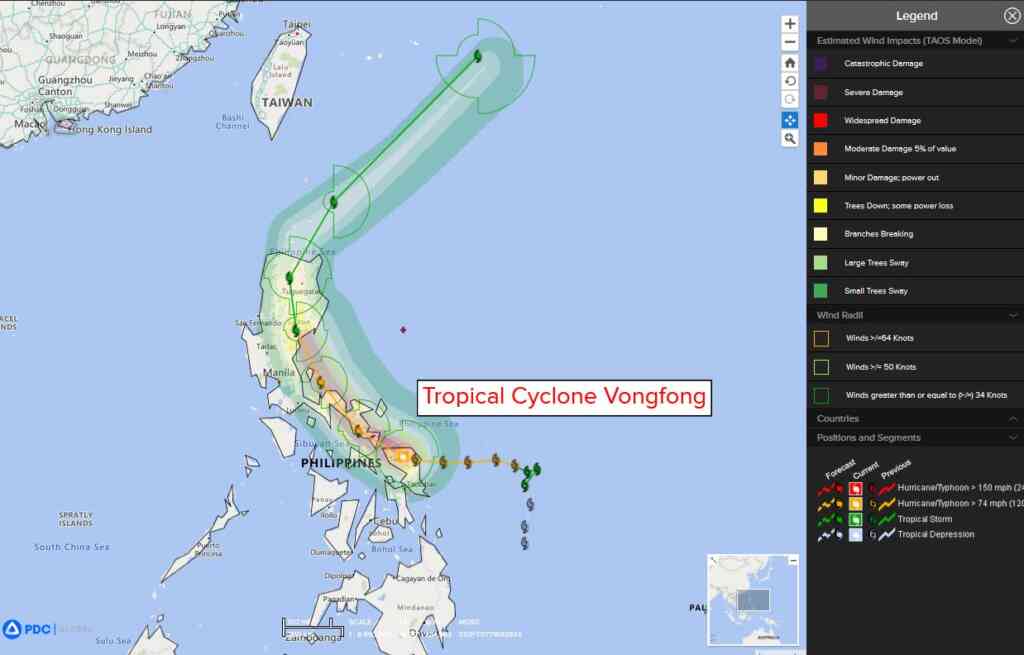 Tropical Cyclone 01W (Vongfong) Sustained winds of 55 knots, with gusts to 70 knots…as of Warning 16 Here’s what the computer models are showing According to the JTWC, satellite imagery shows that the recent eye has closed and convection has diminished within the eastern semi-circle of the system. The environment remains favorable, with low 10-15 knot wind shear, and robust radial outflow. The storm will track northwestward and then northward through the next 12-36 hours. A continuous weakening trend is forecast as TY 01W travels across the Philippines, as favorable conditions offset the frictional effects of the islands. A more pronounced weakening trend is expected as the system tracks over Luzon. After 72 hours, TY Vongfong will begin a northeasterly track after entering the Luzon Strait. Increasing 25-30 knot wind shear will then occur, along with cooling sea surface temperatures will lead to further weakening to 35 knots by 96 hours. What Pagasa is saying about (what they’re calling) Ambo     >>> At the same time, there’s a tropical disturbance, being referred to as Invest 91B, located 602 NM south-southeast of Visakhapatnam, India Here’s what the computer models are showing According to the JTWC, satellite imagery shows a broad low level circulation with flaring convection offset to the south. Invest 91B is in a favorable environment for further development, with good poleward outflow, warm sea surface temperatures, and low <15 knot wind shear. Global models are in general agreement that Invest 91B will continue to consolidate and intensify as it tracks northward in the Bay of Bengal. Maximum sustained winds are estimated at 15-20 knots. The potential for development of a significant tropical cyclone within the next 24 hours is high.

There are no active tropical cyclones PDC will resume production of these daily reports when the 2020 hurricane season begins again on May 15th.