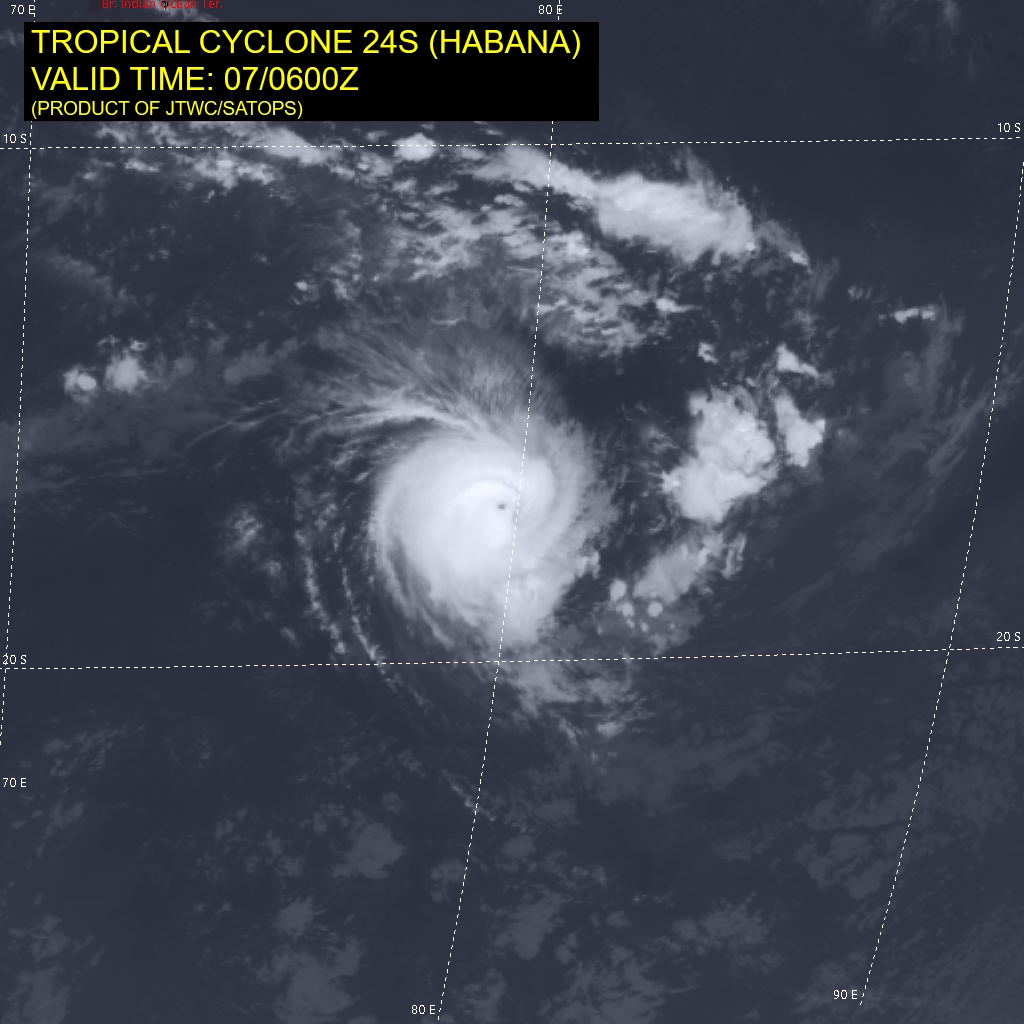 Sustained 100 knot winds…with gusts to 125 knots (as of Warning Number 8) Here’s what the computer models are showing According to the JTWC, satellite imagery shows a compact system that maintained deep, symmetric central dense overcast and a pinhole 5 NM eye. TC 24S is in an overall favorable environment with good radial upper level outflow, low 10-15 knot wind shear, and warm sea surface temperatures. TC Habana is expected to move poleward, after 24 hours a ridge will build to the south and assume steering, turning the storm to a westward track, then after 96 hours, west-southwestward. TC 24S is forecast to weaken primarily due to diminishing upper level outflow, and by 36-48 hours, will be reduced to 85 knots. After 48 hours, increased outflow from the ridge to the south will fuel a secondary intensification phase and by tau 120, will re-strengthen to 105 knots…possibly higher with rapid intensification.

Sustained 45 knot winds…with gusts to 55 knots (as of Warning Number 1) Here’s what the computer models are showing According to the JTWC, the system will continue tracking generally southeastward over the next 36 hours, and complete extratropical transition as an approaching trough overtakes the system. Very strong >30 knot northwesterly wind shear is displacing deep convection to the southeast of the low-level circulation center. However, strong poleward upper-level outflow and passage over warm water are supporting storm intensity despite the noted shear. Slow, although steady, weakening is expected during the 36 hour forecast period under the ongoing, competing influences of strong wind shear, passage over cooler water…and favorable upper-level diffluence.   Here’s a link to the Joint Typhoon Warning Center (JTWC)   For real-time information on current disasters download PDC’s free Disaster Alert mobile app available for your iOS or Android devices today! Also be sure to monitor PDC on Twitter, Facebook, and by accessing the web-accessible Disaster Alert from your computer, phone, or tablet.