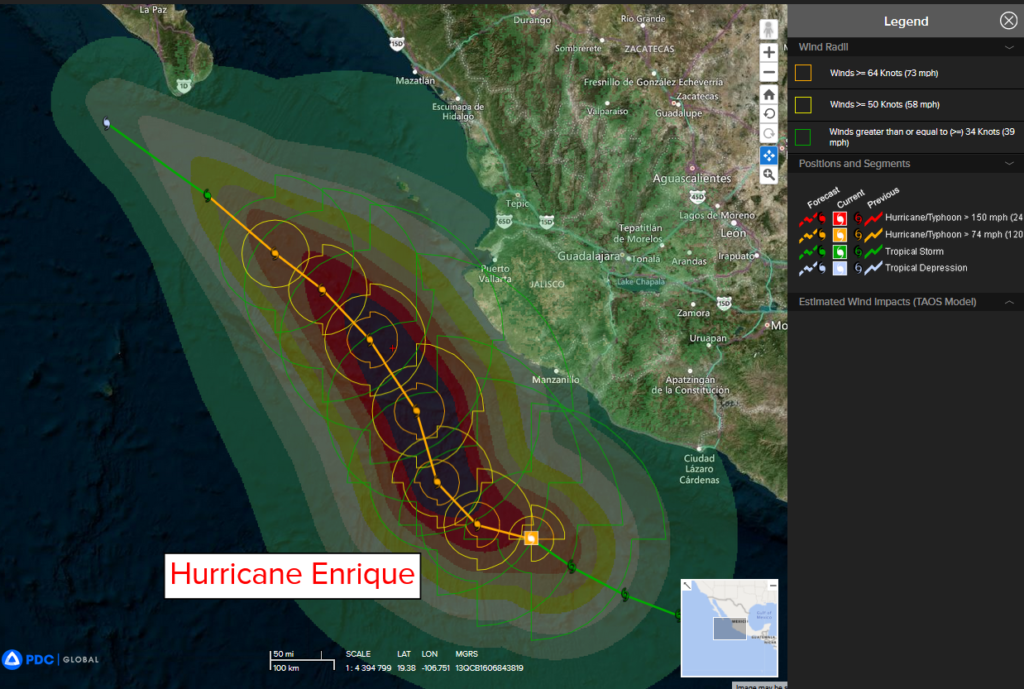 HURRICANE WATCH ISSUED FOR A PORTION OF THE COAST OF SOUTHWESTERN MEXICO AS THE CORE OF ENRIQUE IS FORECAST TO PASS JUST OFFSHORE What the computer models are showing for Hurricane Enrique Enrique is moving toward the northwest near 5 mph (7 km/h). A turn to the north-northwest is expected later tonight with the storm maintaining a northwest to north-northwest heading during next couple of days. On the forecast track, the center of Enrique is expected to pass near or just offshore of the southwestern coast of Mexico late Sunday through Monday. Maximum sustained winds remain near 85 mph (140 km/h) with higher gusts. Some slight strengthening is possible tonight or early Sunday, but Enrique is expected to begin to gradually weaken early next week as it moves over cooler waters. Hurricane-force winds extend outward up to 25 miles (35 km) from the center and tropical-storm-force winds extend outward up to 140 miles (220 km). HAZARDS AFFECTING LAND WIND: Tropical storm conditions are likely occurring in the eastern portions of the warning area. These winds are expected to spread westward within the warning area tonight and through the weekend. Tropical storm conditions are possible in the watch area on Sunday. RAINFALL: Through Monday, Enrique is expected to produce total rain accumulations of 6 to 12 inches with isolated maximum amounts of 18 inches over Colima and coastal sections of Michoacan and Jalisco in southwest Mexico. These amounts would likely produce life- threatening flash flooding and mudslides over portions of southwestern Mexico. SURF: Swells generated by Enrique will affect the southwestern coast of Mexico during the next few days. These swells are likely to cause life-threatening surf and rip current conditions.   Tropical Cyclone 06W (Champi) 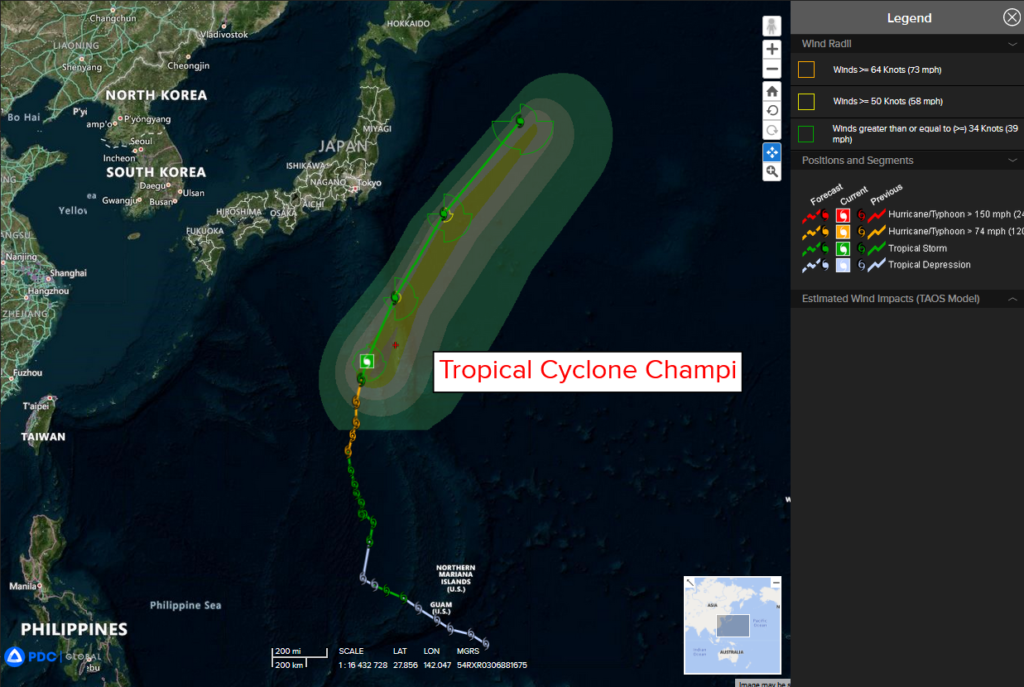 Sustained 35 knot winds…with gusts to 45 knots (as of Warning Number 25) Here’s what the computer models are showing According to the JTWC, satellite imagery shows the system continues to weaken, elongate, and unravel as it enters a high wind shear area under the strong westerlies. TS Champi will accelerate northeastward on the poleward side of the steering ridge, and by 36 hours will be 380 NM east of Misawa AB, Japan. The system will gradually weaken under the highly unfavorable environment. Concurrently, by 24 hours, TS 06W will start extra-tropical transition and by 36 hours, will transform into a gale-force cold core low with an expansive wind field.   Here’s a link to the National Hurricane Center in Miami Here’s a link to the Central Pacific Hurricane Center in Honolulu Here’s a link to the Joint Typhoon Warning Center (JTWC)   For real-time information on current disasters download PDC’s free Disaster Alert mobile app available for your iOS or Android devices today! Also be sure to monitor PDC on Twitter, Facebook, and by accessing the web-accessible Disaster Alert from your computer, phone, or tablet.