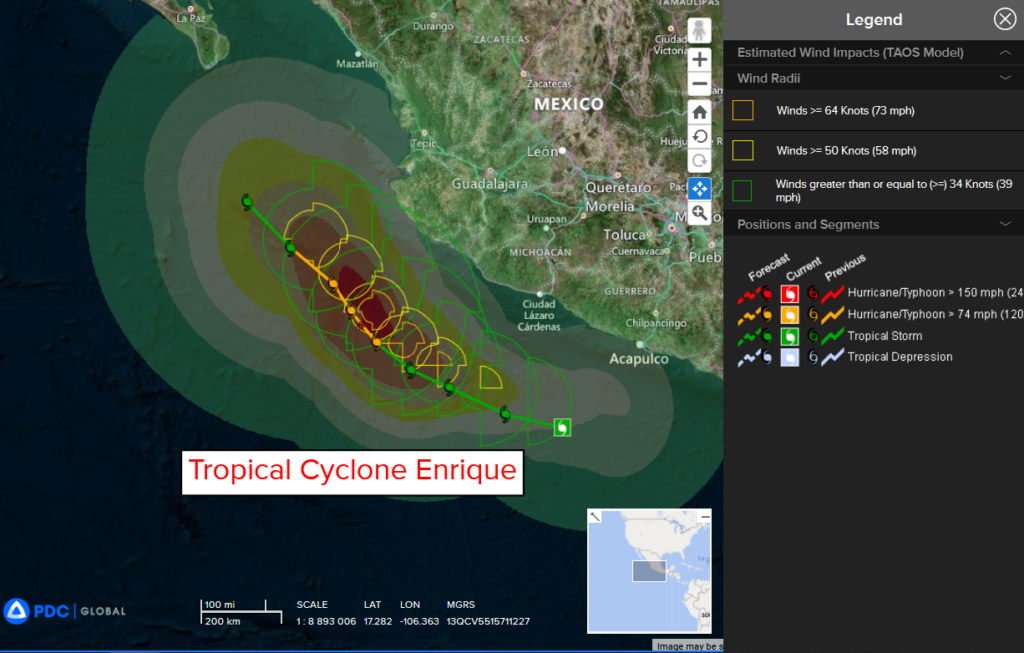 ENRIQUE QUICKLY STRENGTHENING…EXPECTED TO BECOME A HURRICANE LATER TONIGHT OR SATURDAY What the computer models are showing for Tropical Storm Enrique Enrique is moving toward the west-northwest near 8 mph. The storm is forecast to gradually slow down with a turn toward the northwest expected to occur by Sunday. On the forecast track, the core of Enrique is expected to remain offshore roughly parallel to the southwestern coast of Mexico during the next few days. Maximum sustained winds have increased to near 65 mph with higher gusts. Additional strengthening is forecast, and Enrique is likely to become a hurricane later tonight or on Saturday. Tropical-storm-force winds extend outward up to 140 miles from the center. HAZARDS AFFECTING LAND WIND: Tropical storm conditions are possible within the watch area by late Saturday. RAINFALL: The outer bands of Enrique are likely to cause locally heavy rains over portions of southwestern Mexico. These rains could cause life-threatening flash floods and mudslides. SURF: Swells generated by Enrique will affect portions of the southwest coast of Mexico during the next few days. These swells are likely to cause life-threatening surf and rip current conditions.   Tropical Cyclone 06W (Champi) 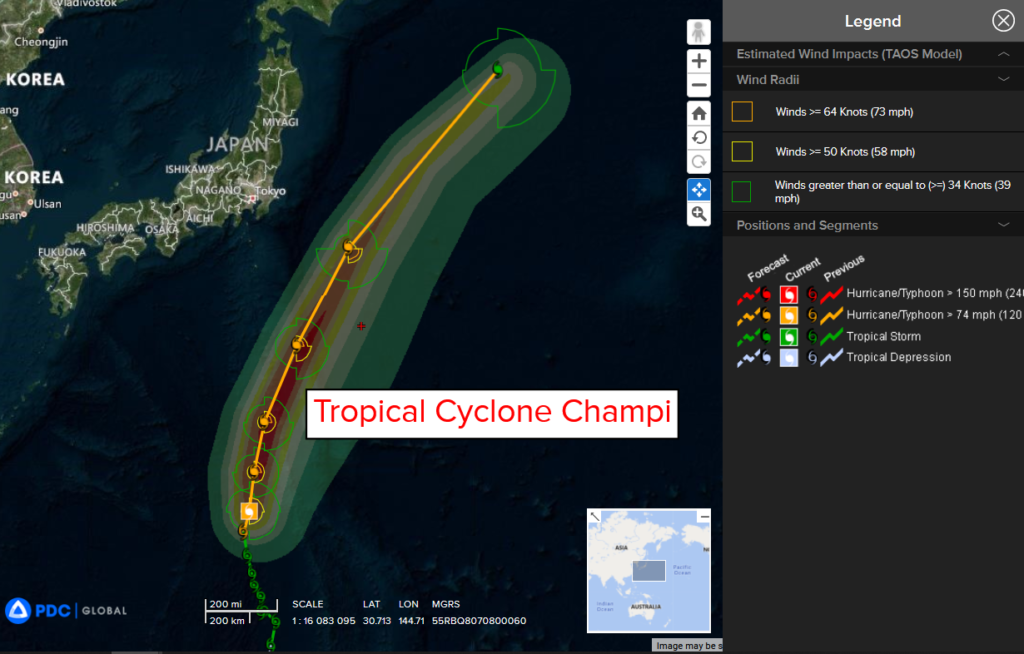 Sustained 65 knot winds…with gusts to 80 knots (as of Warning Number 21) Here’s what the computer models are showing According to the JTWC, satellite imagery shows the system continues to struggle to maintain persistent, organized convective bands. Convective activity waned after 0900z, but has begun to once again flare near the assessed low level circulation center. High resolution model cross sections indicate mid-level dry air impinging from both the east and west, likely inhibiting the continued consolidation of the convective core. Sea surface temperatures remain warm and wind shear is low while upper level outflow is overall moderate. The equatorward channel is fairly robust but beginning to be constrained on towards the east. Poleward outflow meanwhile is increasing, but confined to very narrow channel ahead of an approaching major shortwave trough, which will continue to pinch the outflow channel progressively smaller over the next 24 hours. Typhoon Champi has reached the axis of the steering ridge, and will begin to track north-northeast over the next 12 hours, before accelerating and turning more sharply northeast thereafter. There remains only a brief period of favorable environmental conditions, before conditions rapidly deteriorate. Through 24 hours, under good poleward and equatorward outflow, warm sea surface temperatures and low wind shear, the system is expected to intensify to a peak of 85 knots. thereafter the passage of a major shortwave trough over the system will introduce westerly convergent flow aloft, while sea surface temperatures decrease and wind shear begins to increase, leading to a slow weakening trend through 36 hours. The system will also begin to undergo extratropical transition by 36 hours as races northeast to the east of Tokyo, shear will increase to over 40 knots, begins moving under the jet stream flow, inducing extratropical transition, which is expected to be completed no later than 72 hours…and as early as 60 hours.   Here’s a link to the National Hurricane Center in Miami Here’s a link to the Central Pacific Hurricane Center in Honolulu Here’s a link to the Joint Typhoon Warning Center (JTWC)   For real-time information on current disasters download PDC’s free Disaster Alert mobile app available for your iOS or Android devices today! Also be sure to monitor PDC on Twitter, Facebook, and by accessing the web-accessible Disaster Alert from your computer, phone, or tablet.