An area of low pressure is expected to form south of southeastern Mexico in a few days. Environmental conditions appear conducive for gradual development thereafter, and a tropical depression is likely to form late this week or this weekend while the system moves west-northwestward parallel to and just offshore of the southern coast of Mexico. * Formation chance through 48 hours…low…near 0 percent * Formation chance through 5 days…high…70 percent   Tropical Cyclone 06W 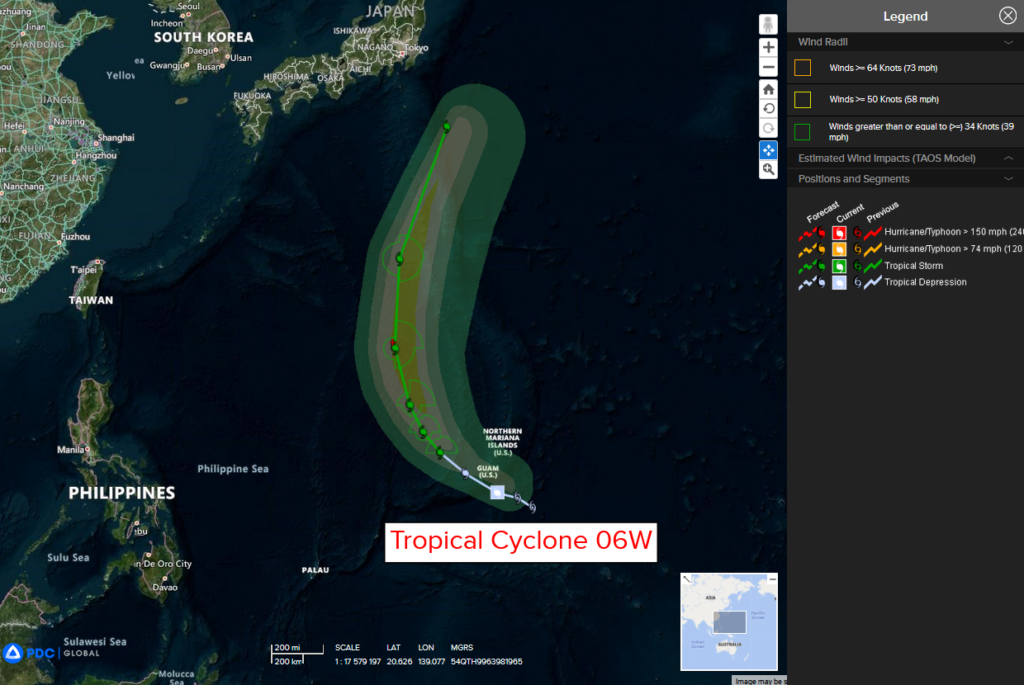 Sustained 30 knot winds…with gusts to 40 knots (as of Warning Number 5) Here’s what the computer models are showing According to the JTWC, satellite imagery shows a somewhat disorganized system, still struggling to consolidate under persistent southerly shear. As the system moves north of the 30th parallel, it will begin to interact with an upper-level major trough moving south over Japan and begin to transition to an extratropical system. In the near-term, as the system continues to struggle with the low to moderate southerly shear and some weakly subsident flow to the west, it is expected to maintain tropical depression strength while passing south of Guam. After 12 hours, as the upper-level outflow environment improves and the track takes it over warmer waters, TD 06W is expected to intensify, peaking at 50 knots by 72 hours through 96 hours. Thereafter, increasing wind shear, combined with decreasing sea surface temperatures will conspire to induce steady weakening through the remainder of the forecast period.   Here’s a link to the National Hurricane Center in Miami Here’s a link to the Central Pacific Hurricane Center in Honolulu Here’s a link to the Joint Typhoon Warning Center (JTWC)   For real-time information on current disasters download PDC’s free Disaster Alert mobile app available for your iOS or Android devices today! Also be sure to monitor PDC on Twitter, Facebook, and by accessing the web-accessible Disaster Alert from your computer, phone, or tablet.