DOLORES EXPECTED TO DISSIPATE OVER INLAND MEXICO BY SUNDAY MORNING…LIFE-THREATENING FLASH FLOODING AND MUDSLIDES LIKELY ACROSS PORTIONS OF SOUTHWESTERN AND WEST-CENTRAL MEXICO Here’s what the computer models are showing According to the NHC…the depression is moving toward the north near 21 mph (33 km/h) and this motion is expected to continue through tonight. Maximum sustained winds are near 30 mph (45 km/h) with higher gusts. Dolores is forecast to dissipate by Sunday morning. HAZARDS AFFECTING LAND  WIND: Wind gusts to near tropical storm force will likely continue over coastal sections of west-central Mexico to the south of Puerto Vallarta through this evening. RAINFALL: Tropical Depression Dolores will produce heavy rainfall of 6 to 10 inches with isolated maximum amounts of 15 inches across coastal sections of the Mexican states of Guerrero, Michoacan, Colima, Jalisco, Nayarit, and southern Sinaloa through the weekend. This will likely produce life-threatening flash flooding and mudslides. SURF: Swells generated by Dolores will affect portions of the southwestern coast of Mexico through the weekend. These swells are likely to cause life-threatening surf and rip current conditions. 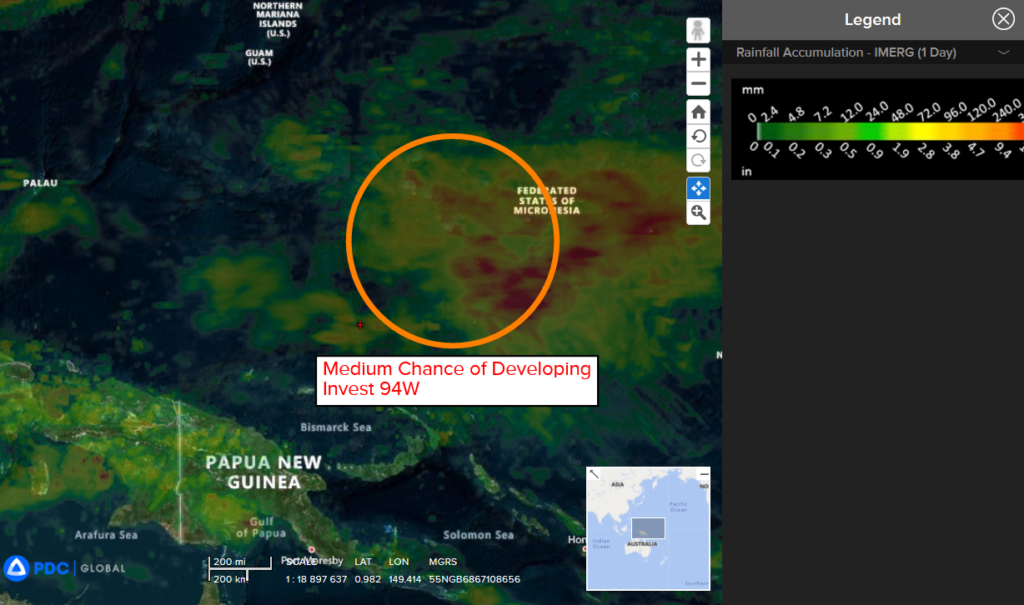 Here’s what the computer models are showing There’s a tropical disturbance being referred to as Invest 94W, which is located approximately 125 NM east of Chuuk According to the JTWC, satellite imagery reveals a very broad area of scattered, disorganized, flaring convection. Invest 94W is in an environment weakly conducive for tropical development with strong equatorward outflow, and warm sea surface temperatures, offset by moderate (10-20 knot) wind shear. Numerical models are in good agreement that invest 94W will continue to track west-northwestward as it slowly intensifies over the next 24-36 hours. Maximum sustained surface winds are estimated at 13-18 knots. The potential for the development of a significant tropical cyclone within the next 24 hours remains medium.   Here’s a link to the National Hurricane Center in Miami Here’s a link to the Central Pacific Hurricane Center in Honolulu Here’s a link to the Joint Typhoon Warning Center (JTWC)   For real-time information on current disasters download PDC’s free Disaster Alert mobile app available for your iOS or Android devices today! Also be sure to monitor PDC on Twitter, Facebook, and by accessing the web-accessible Disaster Alert from your computer, phone, or tablet.