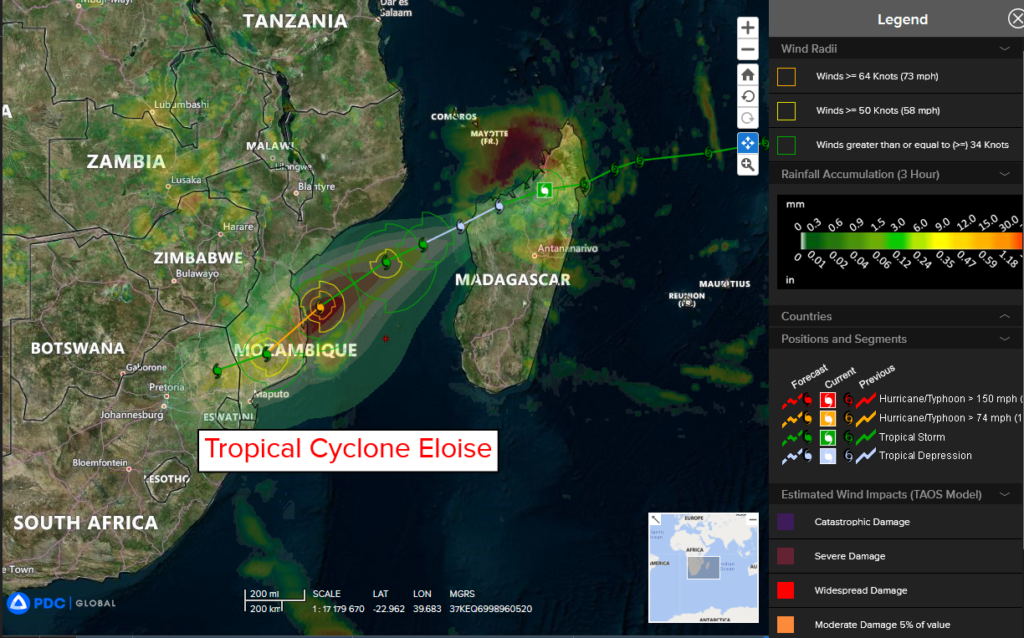 Here’s what the computer models are showing Sustained 35 knot winds…with gusts to 45 knots (as of Warning Number 8) According to the JTWC…reveals that TC 12S has steadily weakened as it moved inland. The majority of the deep convection has eroded over the low level circulation center with some flaring deeper convection over the northern semicircle. Environmental analysis depicts robust equatorward outflow, being offset by moderate 15-20 knot wind shear, and the frictional terrain effects reflected in the weakening structure. Throughout the forecast period, the system is expected to track generally west-southwestward TC 12S will continue to weaken as it tracks over Madagascar prior to emerging over the Mozambique Channel prior to 24 hours. Within the channel, the warm sea surface temperatures, and low wind shear values will allow the system to steadily re-intensify to 80 knots by 72 hours. Afterwards, TC 12S will make landfall in southern Mozambique and land interaction will begin to weaken the system thereafter as it tracks inland.   Tropical Cyclone 13S

Here’s what the computer models are showing Sustained 35 knot winds…with gusts to 45 knots (as of Warning Number 1) According to the JTWC…reveals an exposed although well-defined low level circulation center, with deep, flaring convection sheared to the northwest. Environmental analysis depicts the system lies in a marginal environment characterized by moderate to high 20-25 knot wind shear, westward outflow and warm sea surface temperatures.

There’s a tropical disturbance being referred to as Invest 92S, which is located approximately 265 NM north-northwest of Broome, Australia Here’s what the computer models are showing According to the JTWC, satellite imagery shows a consolidating low level circulation center with flaring deep convection…particularly southeast of the center. Environmental analysis shows a favorable environment for development, with low <15 knot wind shear, poleward outflow aloft, and warm sea surface temperatures. Global models are in good agreement that invest 92S will track generally westward as it consolidates and strengthens. Maximum sustained surface winds are estimated at 25-30 knots. The potential for the development of a significant tropical cyclone within the next 24 hours remains high.
Here’s a link to the Joint Typhoon Warning Center (JTWC)
For real-time information on current disasters download PDC’s free Disaster Alert mobile app available for your iOS or Android devices today! Also be sure to monitor PDC on Twitter, Facebook, and by accessing the web-accessible Disaster Alert from your computer, phone, or tablet.