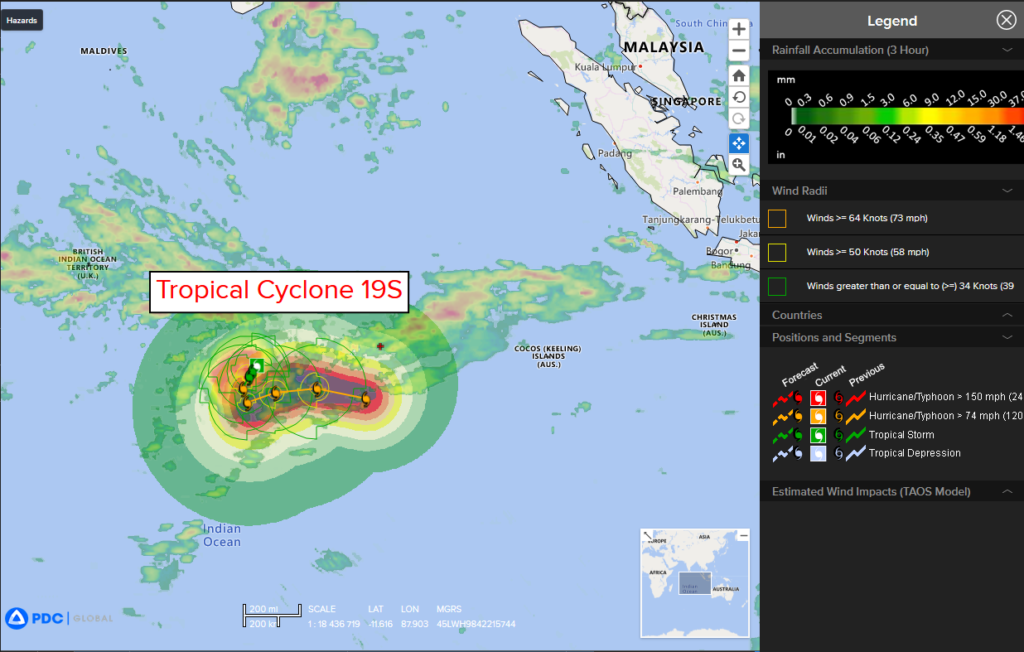 Sustained 50 knot winds…with gusts to 65 knots (as of Warning Number 2) Here’s what the computer models are showing According to the JTWC, satellite imagery depicts a rapidly consolidating, compact system with deep convective banding wrapping tightly into the low-level circulation center. In addition, there’s an intense curved band of deep convection wrapping from the western quadrant into the northern quadrant of the system with a small core (approximately 60 NM diameter) surrounding a developing, ragged microwave eye feature. Upper-level analysis indicates favorable conditions with robust equatorward outflow, expanding poleward outflow and low to moderate 10-20 knot wind shear, which has gradually decreased over the past 12 hours. Additionally, sea surface temperatures are favorable at. Overall, the steering environment is expected to be complex, weak and evolving throughout the forecast period lending low overall confidence to the JTWC forecast track. Through 48 hours, TC 19S will steer slowly south-southwestward to southward along the western periphery of a subtropical ridge positioned to the east. This ridge will weaken and system should slow, perhaps become briefly quasi stationary, then track east-northeastward to eastward as a near equatorial ridge assumes control of the steering. After 96 hours, the steering ridge is expected to build northeast of the system which should steer it east-southeastward. TC 19S is forecast to rapidly intensify starting at 12 hours, during the diurnal maximum, reaching 95 knots by 48 hours, and a peak intensity of 110 knots by 72 hours…with slight weakening trend through 120 hours.   Here’s a link to the Joint Typhoon Warning Center (JTWC) For real-time information on current disasters download PDC’s free Disaster Alert mobile app available for your iOS or Android devices today! Also be sure to monitor PDC on Twitter, Facebook, and by accessing the web-accessible Disaster Alert from your computer, phone, or tablet.