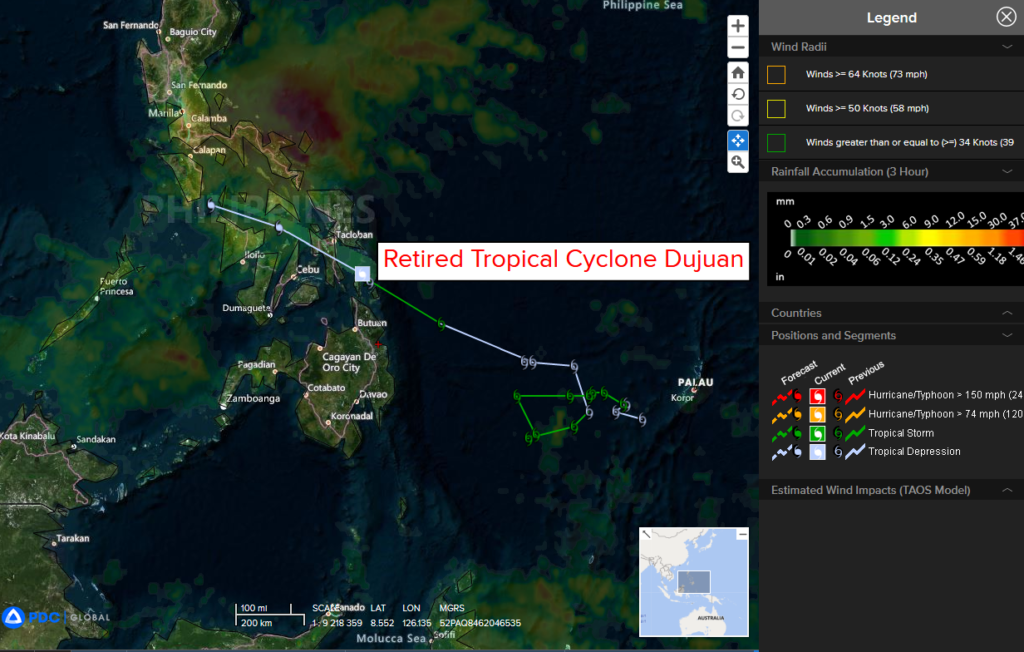 Sustained 25 knot winds…with gusts to 35 knots (as of Warning Number 20) Here’s what the computer models are showing According to the JTWC, the current position is situated within an exposed low-level circulation center evident in animated multi-spectral satellite imagery. The intensity is set at 25 knots consistent with the weakening structure and nearby synoptic observations. TD 01W is tracking northwestward and will continue to track northwestward to westward over the central Philippine Islands, and steadily dissipate over the next 12 to 24 hours, as wind shear increases, along-track sea surface temperature decreases, and the circulation interacts occasionally with land.

There’s a tropical disturbance being referred to as Invest 94P, which is located approximately 344 NM northeast of Suva, Fiji Here’s was the computer models are showing According to the JTWC, satellite imagery shows a very broad and elongated circulation embedded in the south pacific convergent zone, with a disorganized area of flaring deep convection along the northern boundary. Upper level analysis indicates high 25+ knot wind shear and ample poleward outflow. Additionally, sea surface temperatures are conducive for development. Global models indicate invest 94P will propagate southeastward along the trough with minimal consolidation or strengthening. Maximum sustained surface temperatures are estimated at 15-20 knots. The potential for the development of a significant tropical cyclone within the next 24 hours remains low.   Here’s a link to the Joint Typhoon Warning Center (JTWC) For real-time information on current disasters download PDC’s free Disaster Alert mobile app available for your iOS or Android devices today! Also be sure to monitor PDC on Twitter, Facebook, and by accessing the web-accessible Disaster Alert from your computer, phone, or tablet.