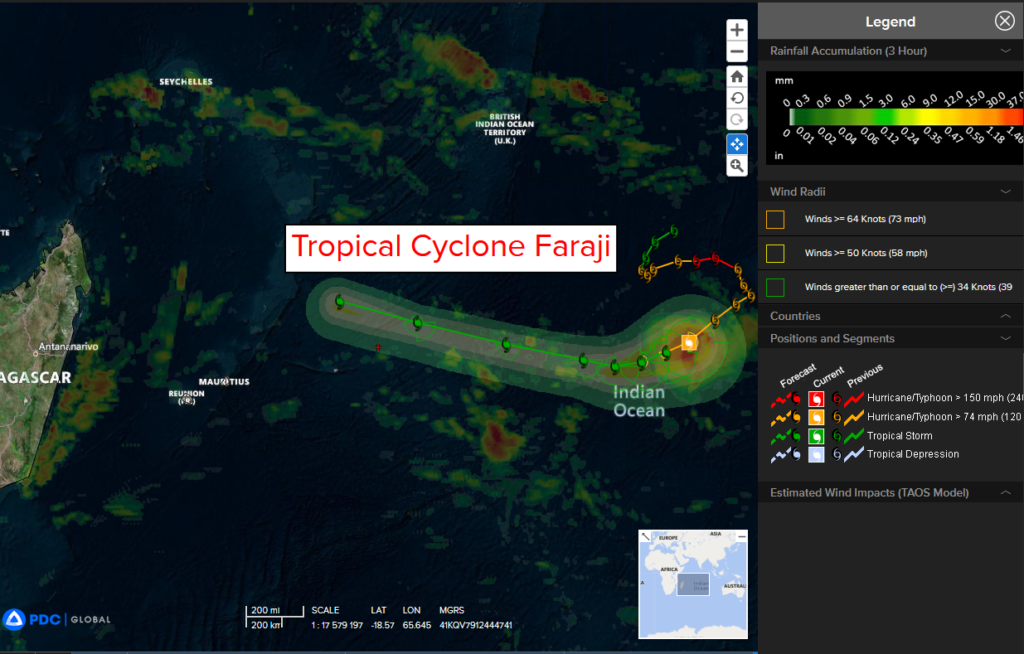 Sustained 50 knot winds…with gusts to 65 knots (as of Warning Number 16) Here’s what the computer models are showing According to the JTWC, satellite imagery shows central dense overcast obscuring a low level circulation center, with transverse banding in the upper level clouds along the northern and western periphery of the system. In addition, there are low level cloud lines that wrap into the obscured low level center. TC Faraji is tracking along the northwestern periphery of a subtropical ridge positioned to the southeast, and through a marginally unfavorable environment characterized by warm sea surface temperatures and robust poleward outflow aloft…offset by high 20-25 knot wind and convergent upper level flow along the northwestern  periphery of the system. TC Faraji will continue to weaken to 45 knots through 36 hours as it tracks west-southwestward under the steering influence of the ridge. Thereafter the primary steering mechanism will shift to a deep layer ridge positioned to the south, that will drive the system generally west-northwestward through the remainder of the forecast period. Continued high wind shear and upper level divergence will prevent the system from intensifying despite warm sea surface temperatures. A brief period of intensification is forecast after 96 hours, as the upper level outflow improves and wind shear decreases…leading to an intensity of 45 knots by 120 hours.   Here’s a link to the Joint Typhoon Warning Center (JTWC) For real-time information on current disasters download PDC’s free Disaster Alert mobile app available for your iOS or Android devices today! Also be sure to monitor PDC on Twitter, Facebook, and by accessing the web-accessible Disaster Alert from your computer, phone, or tablet.