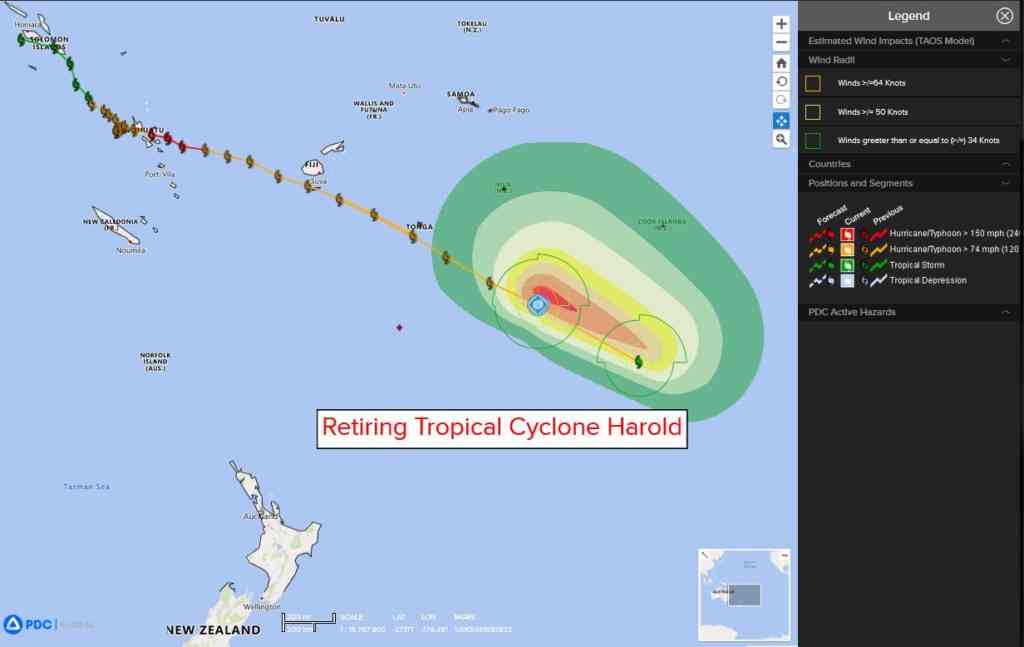 Tropical Cyclone 25P (Harold) – Final Warning Sustained winds of 80 knots, with gusts to 100 knots…as of Warning 28 Morphed Integrated Microwave Imagery Looping Radar Image as Harold moved by Fiji Here’s what the computer models are showing According to the JTWC, strong, persistent northwesterly wind shear continues to displace the bulk of central convection to the south and southeast. The strong 35 knot wind shear and cooler sea surface temperatures are offset by robust poleward outflow. However, wind shear is expected to increase through the forecast period (to 40 knots)…in addition to cooler sea surface temperatures. TC 25P will under go extratropical transition as it accelerates east-southeast…within the prevailing mid-latitude westerlies. News story from Aljazeera Wikipedia information on this storm

There are no active tropical cyclones PDC will resume production of these daily reports when the 2020 hurricane season begins again on May 15th. 2019 Hurricane Season Summary for the NE Pacific Basin The 2019 Pacific hurricane season was a moderately active season which produced nineteen named storms, though most were rather weak and short-lived. Only seven hurricanes formed, the fewest since 2010. The season officially began on May 15 in the East Pacific Ocean and ended on November 30. These dates conventionally delimit the period of each year when most tropical cyclones form in the Pacific basin. However, the formation of tropical cyclones is possible at any time of the year. The season had a slow start, with no tropical cyclones forming in the basin during the month of May for the first time since 2016 (though Hurricane Pali formed in January 2016), and the first time that no storms formed before the month of June since 2011. The season became the latest-starting Pacific hurricane season on record since reliable records began in 1971 with the first tropical depression, which eventually became Hurricane Alvin, forming on June 25. The strongest hurricane of the season, Barbara, formed on June 30 and peaked as a high-end Category 4 hurricane on July 3. August was rather quiet with no hurricanes forming during the month, a first for a season since 1973. September was much more active with six systems developing, of which three became hurricanes. With the formation of Ema on October 12, 2019 became the first season since 2016 in which more than one tropical cyclone was named in the Central Pacific Ocean. Activity decreased appreciably in October and November as most of the storms remained weak. Land impact was relatively minimal. The remnants of Barbara caused power outages in Hawaii in early July. Hurricanes Erick and Flossie both threatened Hawaii, but the systems weakened significantly before reaching the islands. Tropical Storm Ivo and Hurricane Juliette both brought strong winds to Clarion Island. In late September, Hurricane Lorena made landfall in southwestern Mexico and Baja California Sur, and its remnant moisture entered the southwestern United States. Lorena was responsible for one death and damages worth US$910,000. Tropical Storm Narda took a nearly identical track a week later, killing six and causing US$15.2 million in damage. Overall, this season was significantly less active and destructive than the previous year…causing about $16.1 million in damages and eleven fatalities. Here’s an animated color enhanced satellite image of the central and eastern Pacific Satellite image of this area