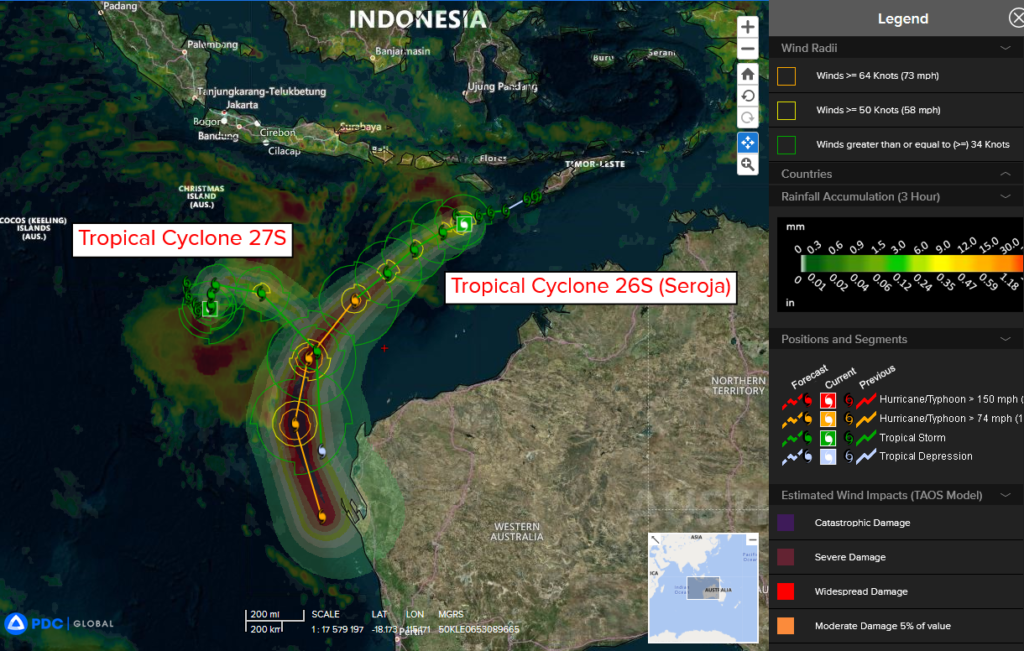 Sustained 45 knot winds…with gusts to 55 knots (as of Warning Number 11) Here’s what the computer models are showing According to the JTWC, satellite imagery shows that the system is being significantly impacted by easterly shear, with weak fragmented convection sheared to the west, exposing the low level circulation center. The system has slowed significantly over the past six hours, but is still traveling southwestward, along the northwest periphery of deep subtropical ridge over western Australia. The overall environment is marginal with moderate 15-20 knot easterly wind shear, weak outflow aloft and warm sea surface temperatures. TC 27S will approach from the west in 48, but TC 26S being the dominate system, will experience little to no impact in overall track motion for the passage of TC 27S. The impact of the moderate wind shear is expected to continue through the next 24 hours, and some additional near-term weakening is possible, though the intensity is forecast to remain steady for the next 12 hours. After 24 hours, there will be a faster rate of intensification through 48 hours. By 72 hours, the system will begin to tap into a strong poleward outflow channel ahead of the approaching mid-latitude trough, allowing for a burst of additional intensification to a peak of 100 knots by 96 hours, with steady weakening thereafter as wind shear increases as it interacts with the strong westerly flow aloft.

Sustained 40 knot winds…with gusts to 50 knots (as of Warning Number 9) Here’s what the computer models are showing According to the JTWC, satellite imagery shows a disorganized and overall weakened system, with flaring deep convection sheared southwest of the assessed low level circulation center. The system lies in a marginal environment with moderate 15-20 knot northeasterly wind shear, being offset by warm sea surface temperatures and robust poleward outflow…and some dry air in the mid-levels. The overall steering pattern remains weak, although 27S is expected to very slowly drift northward over the next 48 hours along the eastern periphery of a weak near equatorial ridge. After 48 hours, the system will start to accelerate east, then southeast and ultimately southward as the binary interaction with TC 26S becomes the dominant steering influence. TC 27S will rapidly transit across the northern and northeastern periphery of TC 26S, and ultimately dissipate or merge with TC 26S by 120 hours. In the upper levels, the general east-northeast flow and outflow from TC 26S are combining to impinge on the eastern side of the system, and limit development. This general pattern is expected to continue through 48 hours, but once the system begins to move into the northern periphery of TC 26S, allowing a burst of intensification, reaching a peak of 50 knots by 72 hours. After moving to the east of TC 26S by 96 hours, the outflow environment becomes convergent, allowing for rapid weakening and dissipation by 120 hours.  Dynamic model guidance is in very poor agreement, with several consensus members depicting a scenario in which TC 27S does not interact with TC 26S and instead tracks northwestward. The JTWC forecast remains consistent with the previous forecast, with low confidence in light of the complexities of the binary interaction forecast…and the very high uncertainty depicted in the model guidance.   Here’s a link to the Joint Typhoon Warning Center (JTWC)   For real-time information on current disasters download PDC’s free Disaster Alert mobile app available for your iOS or Android devices today! Also be sure to monitor PDC on Twitter, Facebook, and by accessing the web-accessible Disaster Alert from your computer, phone, or tablet.