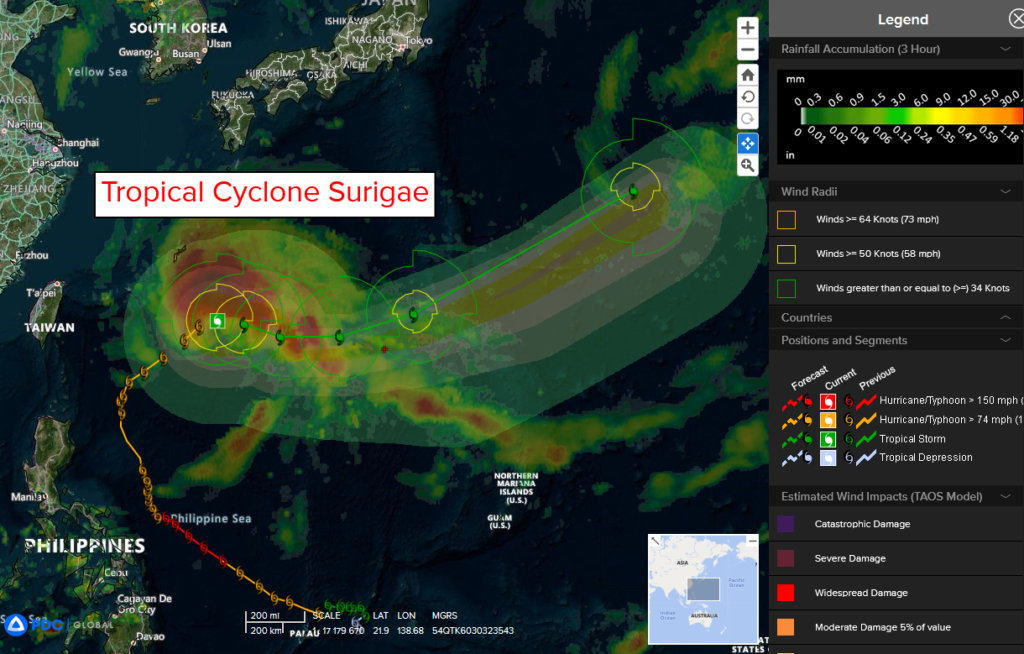 Sustained 55 knot winds…with gusts to 70 knots (as of Warning Number 43) Here’s what the computer models are showing Looping, wide view satellite image…showing TS Surigae According to the JTWC, over the past six hours, TS 02W has transitioned to a subtropical structure featuring a rapidly expanding wind field and displacement of remaining convection well to the east of the exposed low-level center. Wind shear, driven by the flow associated with a trough over the system, exceeds 30 knots, and the system is moving over an area of cooler sea surface temperatures. TS 02W will continue to weaken in the near-term as wind shear persists, and the system passes over slightly cooler ocean water. However, the weakening trend will be limited, due to the interaction with aforementioned shortwave trough over the system. TS 02W is expected to turn eastward and slightly equatorward over the next 36 hours, following the flow associated with reorienting subtropical ridging to the south and west, and ahead of an amplifying, deep-layer mid-latitude trough developing to the north. Around or just after 36 hours, this amplifying trough is expected to dig far enough equatorward to directly interact with TS 02W. Transition from a subtropical to extratropical structure will occur as 02W merges with this trough, with full transition anticipated by 48 hours. Favorable interaction between the mid-latitude trough and 02W will aid strengthening of the wind field after 36 hours, resulting in a re-intensification to storm force (50 knots) or above. 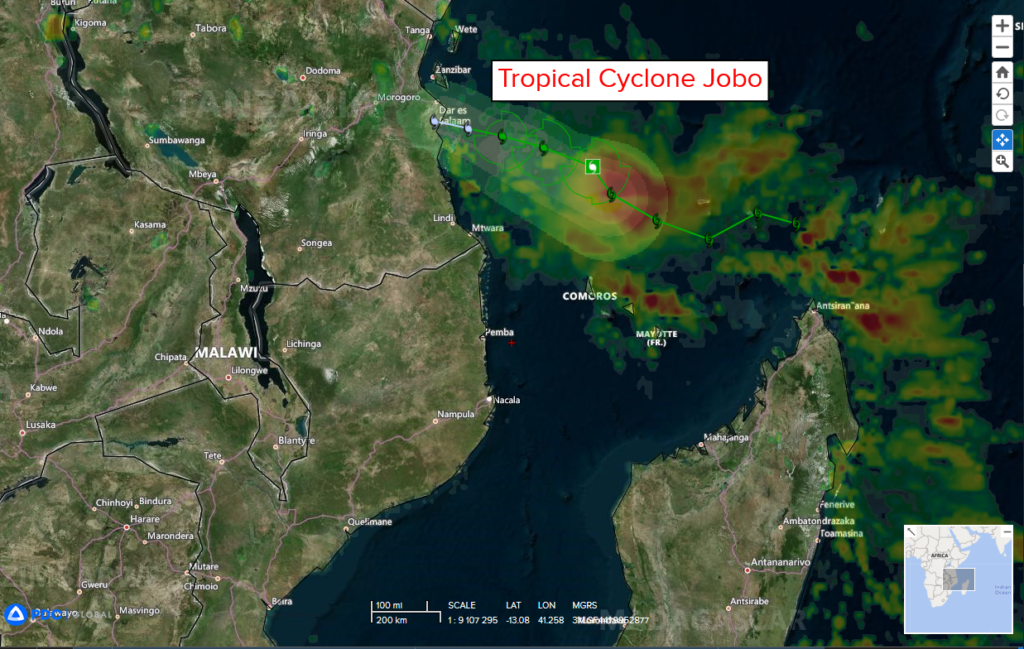 Tropical Cyclone 29S (Jobo) Sustained 35 knot winds…with gusts to 45 knots (as of Warning Number 7) Here’s what the computer models are showing According to the JTWC, TC 29S is tracking toward an expected landfall near Dar es Salaam, Tanzania around 48 hours, under the steering influence of subtropical ridging to the south. Much of the deep convection associated with the system has dissipated over the past 12 hours, as the compact circulation contends with a layer of dry air in the mid-levels. TC 29S will continue tracking west-northwestward and steadily dissipate throughout the forecast period under the current steering and environmental influences, falling below the warning threshold intensity of 35 knots prior to landfall. There is a significant amount of spread in the models, although regardless of the exact track, the system will very likely move inland as a weak remnant circulation.   Here’s a link to the Joint Typhoon Warning Center (JTWC)   For real-time information on current disasters download PDC’s free Disaster Alert mobile app available for your iOS or Android devices today! Also be sure to monitor PDC on Twitter, Facebook, and by accessing the web-accessible Disaster Alert from your computer, phone, or tablet.