There are no active tropical cyclones 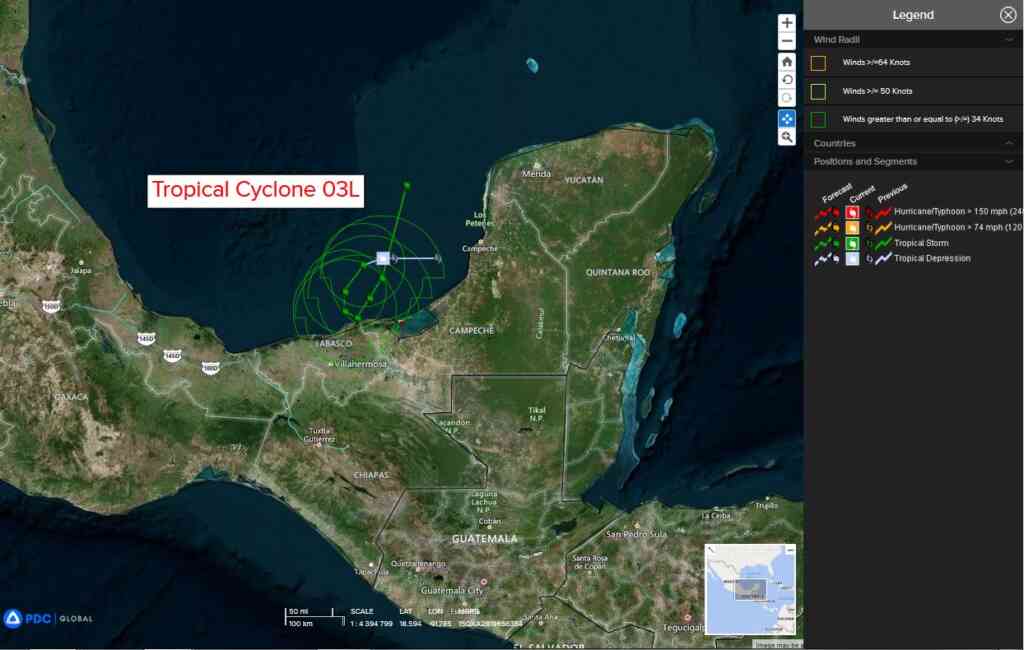 This system is likely to linger in the vicinity of the southwestern Gulf of Mexico for several days this week. Areas near the Gulf Coast from Texas to Florida should monitor the progress of this system. The last June hurricane in the Gulf of Mexico was Alex, which made landfall in northeastern Mexico on June 30, 2010…which brought flooding rain to Monterey, Mexico, and the lower Rio Grande Valley of Texas. According to the NHC, Cristobal is moving toward the southeast near 2 mph (4 km/h), and this general motion is expected to continue this morning, followed by turn toward the east this afternoon. A motion toward the north-northeast and north is expected on Thursday and Friday. On the forecast track, the center will cross the southern Bay of Campeche coast later today. and move inland over eastern Mexico tonight and Thursday. The center is forecast to move back over the Bay of Campeche Thursday night and Friday. Nearby surface observations indicate that maximum sustained winds have increased to near 60 mph (95 km/h) with higher gusts. Some additional increase in strength is possible until the center crosses the coast. Gradual weakening is forecast while the center remains inland, but restrengthening is expected after Cristobal moves back over water Thursday night and Friday. Tropical-storm-force winds extend outward up to 70 miles (110 km) from the center. HAZARDS AFFECTING LAND RAINFALL: Cristobal is expected to produce total rain accumulations of 10 to 20 inches with isolated maximum amounts of 25 inches over parts of the Mexican states of Tabasco and Campeche. Cristobal is also expected to produce total rain accumulations of 10 to 15 inches over parts of the Mexican states of Chiapas, Veracruz, Quintana Roo, Yucatan and Oaxaca. Additional rainfall of 10 to 15 inches, with isolated amounts of 25 inches is expected along the Pacific coasts of Chiapas, Guatemala, and El Salvador. Some of these Pacific locations received 20 inches of rain over the weekend, and storm total amounts of 35 inches are possible. Rainfall of 3 to 6 inches, with isolated amounts of 10 inches, is expected across portions of Honduras and Belize. Rainfall in all of these areas may produce life-threatening flash floods and mudslides. WIND: Tropical storm conditions are affecting the coast within portions of the warning area. Latest satellite image of the Gulf of Mexico