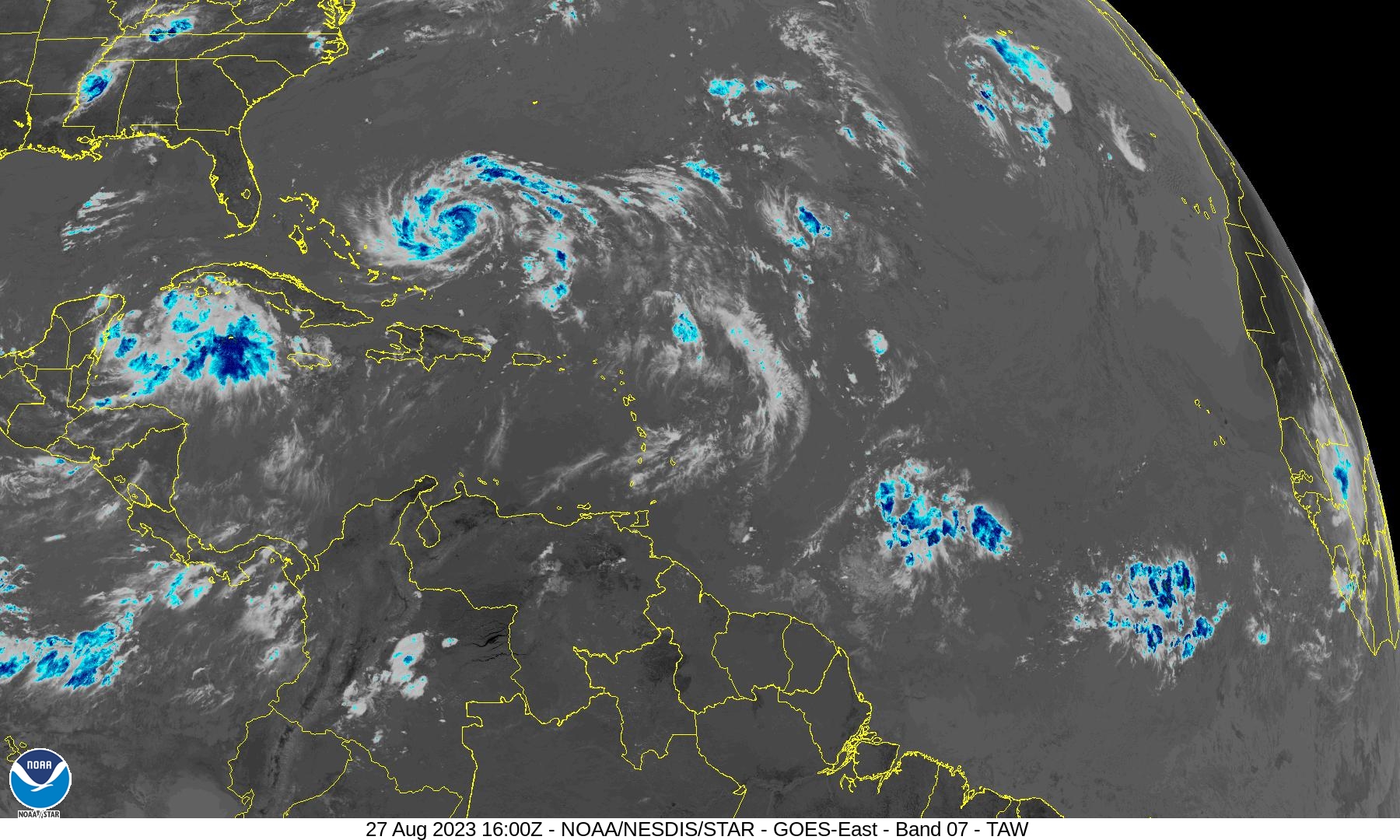 Tropical Storm 07L (Gonzalo) According to the NHC, a westward to west-northwestward motion with an increase in forward speed is expected through the weekend. On the forecast track, the center of Gonzalo will approach the southern Windward Islands Friday night and move across the islands Saturday and into the eastern Caribbean Sea Sunday. Maximum sustained winds are near 60 mph (95 km/h) with higher gusts. Some strengthening is forecast during the next day or two, and there is still a chance that Gonzalo could become a hurricane. Weakening is expected after Gonzalo moves into the Caribbean Sea and the cyclone is expected to dissipate by the middle of next week. Tropical-storm-force winds extend outward up to 25 miles (35 km) from the center. >>> A tropical wave located near the west coast of Africa is expected to move westward across the tropical Atlantic during the next several days. Some development of this system is possible early next week when it reaches the western tropical Atlantic. * Formation chance through 48 hours…low…near 0 percent * Formation chance through 5 days…low…30 percent  Here’s a satellite image of the Atlantic Ocean   Caribbean Sea: WSI satellite image of the Caribbean Sea Latest satellite image of the Caribbean Sea and the Gulf of Mexico   Gulf of Mexico: Tropical Storm 08L (Hanna)

According to the NHC, Hanna is moving toward the west-northwest near 7 mph (11 km/h) and a west-northwestward to westward motion is expected during the next couple of days. On the forecast track, the center of the storm is expected to move across the northwestern Gulf of Mexico on Friday and make landfall along the Texas coast on Saturday. Maximum sustained winds are near 40 mph (65 km/h) with higher gusts. Additional strengthening is expected until the system makes landfall. Steady weakening is expected after Hanna moves inland. Tropical-storm-force winds extend outward up to 35 miles (55 km) from the center. HAZARDS AFFECTING LAND WIND: Tropical Storm conditions are expected in the warning area by Friday night or Saturday morning. Tropical storm conditions are possible within the watch area by Friday night or Saturday morning. RAINFALL: The tropical depression is expected to produce 3 to 5 inches of rain with isolated maximum totals of 10 inches through Monday along the Gulf Coast of the United States from Louisiana to south Texas, and inland to the Mexican states of Coahuila, Nuevo Leon, and northern Tamaulipas. This rain may result in life-threatening flash flooding, rapid rises on small streams, and isolated minor-to-moderate river flooding. SURF: Swells generated by the tropical cyclone are expected to increase and affect much of the Texas and Louisiana coasts in a day or two. These swells are likely to cause life-threatening surf and rip current conditions.