U.S. Agency for International Development (USAID) Office of Foreign Disaster Assistance (OFDA) is supporting the second phase of a Flood Modeling and Early Warning Capacity Development Project (FEW2) in Vietnam. Key stakeholders convened June 4 in Hanoi, following the project’s official approval by the Government of Vietnam. The meeting was held by the Vietnam Ministry of Agriculture and Rural Development (MARD) and Pacific Disaster Center (PDC) in order to review planned project outcomes, goals, and timelines with stakeholder agencies within MARD, as well as those under the Ministry of Natural Resources and Environment (MONRE) and other members of the country’s Central Committee for Flood and Storm Control (CCFSC).

MARD Vice Minister Dr. Hoang Van Thang delivered opening remarks, re-emphasizing the importance of this project and pledging his support to achieve success. FEW2 aims to enhance the ability of central and provincial-level decision makers and disaster managers to assess flood events, evaluate their likely impacts, and reach those at risk with meaningful warning messages. The goals of this two-year project will be realized by the expansion and enhancement of a web-accessible decision support system called VinAWARE, based on PDC’s DisasterAWARE platform. The initial development and pilot deployment of VinAWARE was funded by a U.S. Trade and Development Agency (USTDA) grant to the Vietnam Disaster Management Center (DMC). This second phase will include capacity development at the national level, as well as within 10 coastal provinces of central Vietnam. An important aspect of this project will be the development of policies and memoranda of understanding necessary to institutionalize the use of VinAWARE within Vietnam’s disaster management framework.

Learn more about the FEW Project with these resources:
• The launch of the USAID-supported FEW2 Project,
• Special training in the use of PDC’s DisasterAWARE was conducted in Vietnam ,
• News of PDC commitment to DM in Vietnam,
• Visitors came to PDC as part of the Flood Early Warning Phase One project,
• A description of the first use of the VinAWARE decision support system ,
• The first Flood Early Warning Project launched in 2009 , and
• Read more about Vietnam’s MARD Disaster Management Center. 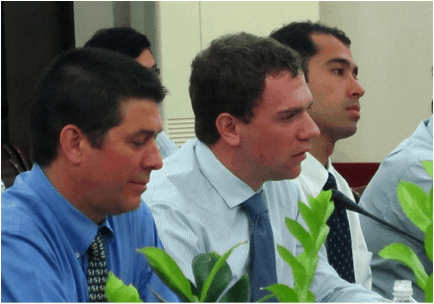