On July 19, Indonesia’s national disaster management organization (Badan Nasional Penanggulangan Bencana, or BNPB) and Pacific Disaster Center (PDC), along with project partners—Humanitarian OpenStreetMap Team (HOT) and MIT/PetaBencana.id—hosted a Project Stakeholder Workshop in Jakarta. The event marked the beginning of Phase II of the USAID-supported InAWARE: Disaster Management Early Warning and Decision Support Capacity Enhancement Project in Indonesia. The national-level workshop was followed, on July 21, by subnational stakeholder engagement workshop in Surabaya, East Java, where a number of Phase II activities will be focused.

PDC has been engaged with BNPB since 2011. At that time, the Center took part in the U.S. National Guard Bureau’s “State Partnership Program” (SPP) that matched Indonesia with the Hawaii National Guard for a project to assess and improve disaster management capabilities. In 2013, PDC—in direct collaboration with BNPB and under USAID OFDA funding—developed, and deployed a system called “InAWARE.” The InAWARE application is a customized version of PDC’s highly successful and widely used DisasterAWARE, a platform that powers hazard-monitoring applications used by more than 1.6 million people worldwide. In brief, InAWARE provides hazard/disaster monitoring and early warning decision support to disaster managers in Indonesia at both central and provincial levels.

In May 2016, the program under which PDC deployed InAWARE was granted a two-year extension by USAID, with an additional $2 million to provide BNPB with further technical assistance in the administration and operational use of InAWARE and to enhance the system and bring it to additional provincial offices. Enhancing InAWARE under this grant includes the incorporation of crowd-sourced information from Humanitarian OpenStreetMap Team (HOT) and Massachusetts Institute of Technology’s PetaBencana.id (MIT/PB), with specific focus on Jakarta and Surabaya. Additionally, PDC plans to strengthen collaboration with the Government of Australia (via DMInnovation, fka AIFDR) and the World Bank-funded “InaSAFE” program to incorporate within InAWARE impact reports of earthquakes, floods, and other hazards. PDC Deputy Executive Director Chris Chiesa, who serves as the director of this project, said “We are really grateful for USAID/OFDA’s continued support and are honored to be working with HOT and MIT/PB on this next phase. We are excited by the opportunity we have to help make Indonesia more resilient to disasters and are grateful to the country’s disaster management professionals for welcoming us and our technology.”

The event was opened by BNPB Chief Willem Rampangilei who noted the importance of partnerships and the project’s compatibility with the BNPB 2015-2019 strategic plan. Head of Data, Information, and Public Relations Dr. Sutopo Purwo Nugroho also provided opening remarks, stating that “For the past two years, thanks to the generous support of USAID/OFDA and the ongoing efforts of PDC, we have been using InAWARE within our national emergency operations center, PUSDALOPS, and in selected BPBD offices. The enhancements and expansions planned for Phase II will increase the importance and usefulness of the system even more. I’m confident that InAWARE will truly become the solution for a national emergency warning systems in Indonesia.”

The workshop was an opportunity for the project team to provide an overview of the Phase II activities and to demonstrate the key systems involved: InAWARE, HOT, and PetaBencana.id.

The Surabaya Stakeholder Engagement event of July 21, hosted by the East Java provincial disaster management agency (Badan Penanggulangan Bencana Daerah, BPBD), was attended by approximately 60 participants from BPBDs, the City of Surabaya, Provincial and City Police, the Bureau for Communication and Information, the Disaster Management Task Force, and others. PDC and its partners provided an overview of the project and detailed the Phase II engagement in Surabaya, where HOT will undertake primary data collection and PetaBencana.id will release a Surabaya version of the CogniCity application.

A number of activities will be undertaken in the coming months to begin collecting data, fielding systems, and delivering training, all with the aim of increasing the effectiveness of disaster preparedness, early warning, and decision making at national and local levels in Indonesia. The goals of InAWARE Phase II are significant and, in another time or place, it might be challenging to do so much in just two years, but all of PDC’s partners—from Australia, MIT, HOT and its volunteers, and especially InAWARE users and data providers in Indonesia—are fully committed to a completely successful collaboration.

For more information on InAWARE: 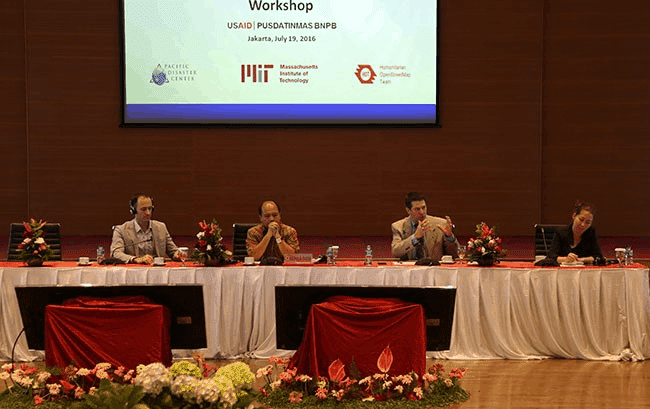