After impacting a number of islands across the Philippines, Tropical Cyclone Hagupit has been downgraded to a tropical storm and the National Disaster Risk Reduction and Management Council (NDRRMC) has lifted the public storm warning. Hagupit, known locally as Ruby, made landfall as a powerful typhoon in Eastern Samar, then crossed through the central Philippine Islands, before impacting Luzon Island. In preparation for the storm, over 600,000 people were evacuated from at-risk areas. Additionally, equipment and personnel were made ready to support response.

The latest situation update from the National Disaster Risk Reduction and Management Council (NDRRMC)—which must still be considered preliminary—reports over 2.2 million people affected, with over 1.6 million currently being served by evacuation centers. As Hagupit moved across the Philippines it caused power outages and disruption of telecommunications, impacted transportation; restoration work is underway.

According to the same preliminary NDRRMC update, 151 people were injured and eight deaths have been recorded from drowning, electrocution, asphyxia, and other trauma. A rockslide occurred in the Municipality of Torrijos, Marinduque Island, and a landslide occurred in Muelle, Puerto Galera, Oriental Mindoro. A total of 61 domestic and nine international flights were been cancelled and 984 passengers remain stranded. Vessels and rolling cargoes are also still impacted. Damage to agriculture is estimated at 1,040,396,587 PHP (~ US$23 million).

The latest Joint Typhoon Warning Center (JTWC) advisory indicates that Hagupit is expected to track west-southwestward and slowly weaken, until making landfall in southern Vietnam. Following landfall it should weaken rapidly and dissipate. Pacific Disaster Center continues to produce situational-awareness products as needed which are posted to DisasterAWARE/EMOPS (Emergency Operations) for disaster managers. Public access to the latest information on this and all global hazards is available in PDC’s Atlas.

For more information on Tropical Cyclone Hagupit:
• Visit the Joint Typhoon Warning Center for the latest updates, or
• Read about it passing through FSM or on approach to the Philippines.

For more information on Typhoon Haiyan, which struck the Philippines in 2013:
• Read about impact, initial response, and response into recovery. 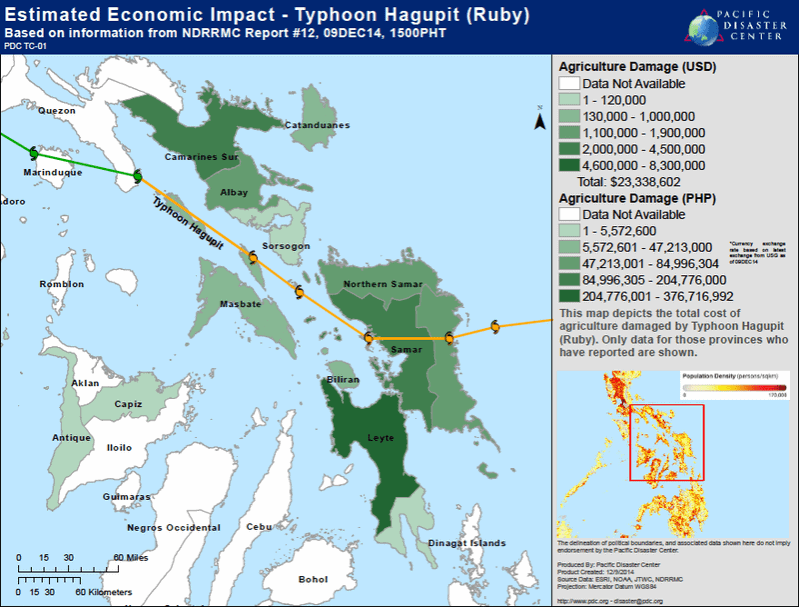