Conducting projects to provide technical assistance in disaster management to foreign governments for more than a decade.


Here, Indonesia’s national disaster management agency (BNPB) celebrates the signing of a memorandum of understanding with PDC, a program managed by the University of Hawai‘i.

If you want to know what PDC is doing around the world, you can browse the PDC site or, to see PDC activity in non-English language appearances on the Web, try the international search options below.

Search for “manajemen bencana” (“disaster management” in Bahasa Indonesian) and Pacific Disaster Center. Most of the sites you find will either be pages on the PDC website or will be (mostly) in English, but some will be in Bahasa Indonesian. Some browsers will translate as you browse. If yours doesn’t, and you want to see the English translation, copy the text into Google Translate.

Search for “thiên tai” (“natural disaster” in Vietnamese) and PDC. While the names of organizations are often left in their original language when two languages share an alphabet, PDC’s name is commonly translated in Vietnamese to (Trung tam) Thiên tai Thái Bình Dương. With the help of Google Translate or your own knowledge of languages other than English, you can devise your own searches. You are likely to be surprised by what you find.

Also, at 4AndroidApps.net there is a Vietnamese-language download offer for PDC’s Disaster Alert mobile app (which is published only in English, so far).

Here’s a translation of the Indonesian text in the image above: Wednesday (23/5 [2012]), Indonesia’s National Disaster Management Agency (BNPB) with partners from the University of Hawai‘i Pacific Disaster Center signed a Memorandum of Understanding or Memorandum of Understanding (MoU) in the office BNPB, Jl. Ir. H. Juanda No. 36, Central Jakarta. The purpose of the MoU is a collaboration that includes the enhancement of management for disaster mitigation, preparedness, emergency response, and post-disaster recovery. The signing was conducted by the Principal Secretary BNPB, Ir. Fatchul Hadi, Dipl. HE, and Executive Director, Pacific Disaster Center, Ray Shirkhodai. Also witnessed by the Head of Data, Information and Public Relations BNPB, Dr. Sutopo Purwo Nugroho, BNPB Head of Education and Training, Ir. Wisnu Widjaja, M.Sc. and Deputy Executive Director, Pacific Disaster Center, Chris Chiesa.


This page from the website of Vietnam’s Ministry of Natural Resources and Environment (MONRE) tells readers about one of many PDC projects in the country. MONRE has been an important contributor to the success of PDC technical assistance efforts in Vietnam.

Here’s a translation of the Vietnamese text above: The Pacific Disaster Center (PDC) at the University of Hawai‘i (USA) in collaboration with the Water Resources University (Vietnam) is doing a pilot project to strengthen flood early warning capacity in eight coastal provinces in the central region of the country. The project was funded by the United States Trade and Development Agency (USTDA) at $500,000; project time planned for seven months. This project will assist the central provinces to have easier access to sources of information on flood warnings, to have the map-type presentation of natural disasters [GIS], and will enhance the capacity for planning and response to natural disasters, as well as contribute to the reduction of damage and loss of life and property caused by floods.

The two examples above are instances of non-U.S. government agencies, PDC partners, describing activities. There are many of these on the Web. Other non-English representations of PDC include U.N. documents and publications translated to official U.N. languages and to local languages. An example is this U.N. International Strategy for Disaster Reduction publication, ISDR Informs.

This kind of surfing can be fun and interesting. It can also help you develop both an understanding of what PDC does and of how the United States is supporting the development of better disaster management in other countries to save lives, livelihoods, infrastructure, and economies. 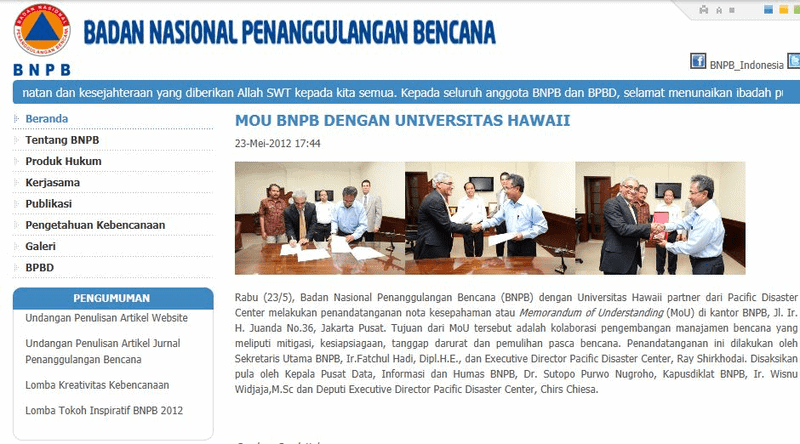