Pacific Disaster Center (PDC) has been working closely with Indonesia’s national disaster management organization (Badan Nasional Penanggulangan Bencana, BNPB) to build in-country capacity to provide training on the use of the nation’s early warning and decision support system, InAWARE. Most recently, March 28–31, staff from the Center conducted a four-day InAWARE Train-the-Trainer (TtT) course at BNPB’s national training centre in Sentul, near Jakarta. The result—13 InAWARE users certified to train and retrain other users as needed—is an important step. This gives the disaster-prone island nation the ability to refresh training, to teach new features and applications of the system, and to prepare new users for success. PDC Deputy Executive Director Chris Chiesa, who directs this project, offered his enthusiastic assessment, “This has been a major goal for our program: establishing a cadre of trainers in Indonesia to train Indonesian disaster managers. I’m proud of those who have helped us get to this point.”

InAWARE, which is now used in Indonesia by BNPB at the national level and in five provincial offices (Badan Penanggulangan Bencana Daerah, BPBD), was deployed by PDC in January 2014 as part of a three-year USAID/OFDA-funded Early Warning and Decision Support Capacity Enhancement Project. The system is a customized version of PDC’s DisasterAWARE. Similar custom versions have been developed for Thailand, Vietnam, and the ASEAN Humanitarian Assistance Centre (AHA Centre), responsible for the coordination of disaster management across 10 Southeast Asian nations.

Immediately after the completion of the TtT session, three of the newly-graduated trainers proved they had mastered both the functions of InAWARE and the required training skills by conducting a one-day User Training at the Jakarta office of BNPB. As the new instructors taught 17 of their colleagues, PDC staff served as observers and were glad to discover they were not required to offer more than support and encouragement.

BNPB Head of Data, Information, and Public Relations Dr.  Sutopo Purwo Nugroho commented on this training: “InAWARE is an essential part of our disaster monitoring and warning operation at BNPB, and developing internal training capacities is an important milestone to have reached. We are very happy for the assistance to become better in our disaster management work from PDC and USAID.”

To learn more about InAWARE and PDC’s assistance to Indonesia, look into: 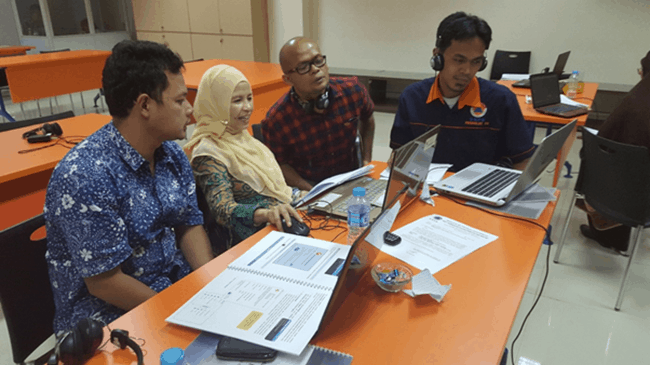 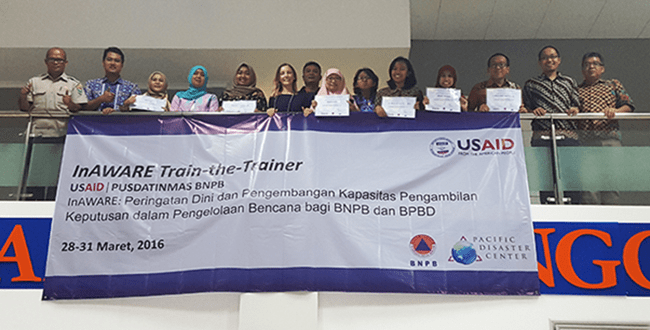