Pacific Disaster Center (PDC) has recently launched a new version of its primary software, DisasterAWARE, tremendously enhancing the utility and benefits of all the systems powered by that platform. With the new version 6 systems, code-named Quantum, devices from powerful desktops to smart phones and a variety of touch-screen devices, can access DisasterAWARE and a wealth of hazard information.  And users can better customize their experience to suit their needs and preferences.

Innovation on this scale is not about helping disaster managers “keep up” with technological breakthroughs. It is about putting disaster professionals at the forefront of evolving technology. PDC is proud of the work it is doing, of course. On the other hand, the scientists, analysts, specialists, and other staff of the Center recognize that the contributions of partners have been central to all their achievements. “It would have been impossible to create the circumstances needed to develop PDC software and deliver its benefits to communities worldwide without countless partners in each and every endeavor,” said PDC Executive Director Ray Shirkhodai, adding, “I have a particular appreciation for the University of Hawai‘i, our Managing Partner for ten years now.”

At first, 1995-96 through 2000, PDC activities were managed by various U.S. government agencies. This was nearly inevitable since the early work of the Center involved finding ways to employ advanced technologies developed by these federal entities in the effort to save lives, preserve livelihoods, and stabilize economies in the wake of natural disasters.

The years 2001 through 2006 were marked by the maturing of PDC’s technologies. At this time, the Center also began reaching beyond Hawaii to the entire Asia-Pacific region and, in limited ways, to countries of the Indian Ocean, Caribbean, and Atlantic with tools, products, and services for disaster management organizations. East-West Center, an institution for public diplomacy in the Asia-Pacific region, was PDC’s Managing Partner for this period.

By 2006, PDC had mastered, re-purposed, and expanded upon the transferred technologies and had learned to operate efficiently on the global stage. At this point, UH was selected as the new Managing Partner. Dr. David Lassner, who is now President of the University of Hawai‘i (UH), was then Chief Information Officer for the university. As such, when UH assumed the role of Managing Partner for the PDC program—an information-technology focused activity—Dr. Lassner was the Principal Investigator (PI) for the Center.

Reflecting on the program’s twentieth anniversary, Dr. Lassner, who is still PI for the PDC program, recently said, “The Pacific Disaster Center is an amazing program that makes people safer and more secure throughout Hawaii, the Asia-Pacific region, and the world. The PDC team develops, deploys and supports modern information and communication tools to support disaster managers, and decision-makers at every level. They integrate deep world-class expertise in disaster resilience, the latest technological capabilities and innovations, and a remarkable cross-cultural human touch. The University of Hawai‘i and I are deeply honored that UH has been selected to serve as the Managing Partner for the PDC since 2006.”

With the support of many remarkable partners, PDC has come a long way in just 20 years and developed a vast arsenal of tools for fostering disaster-resilient communities worldwide. What’s next? No one knows, but follow disasteraware on Twitter and Facebook, and check in regularly on the web at pdc.org and you’ll be among the first find out.

To get a better understanding of PDC: 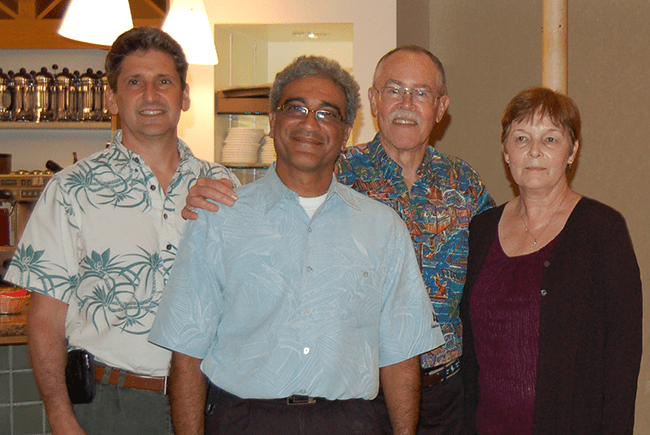