Haiyan response efforts in the Philippines transitioning to recovery phase

Disaster response efforts continue to expand across affected areas in the central Philippines after Typhoon Haiyan made landfall three weeks ago. While logistical issues have significantly improved, hard-to-reach remote communities, poor communications and power outages have hindered coordination for disaster operations, the UN Office for the Coordination of Humanitarian Affairs (UNOCHA) reported. More planning will be required for a smooth transition as early recovery efforts commence, and some international partners, including foreign militaries and international health teams, prepare to depart.

Assessments have also identified a lack of critical information on aid, missing relatives, protection, health issues, and recovery planning. Pacific Disaster Center (PDC) remains engaged in producing a variety of situational awareness products to its established data partners and others providing aid. Such products help to maintain a comprehensive view of the disaster situation and they support effective decision-making. Commenting on PDC’s valued data partnerships PDC Deputy Executive Director Chris Chiesa stated, “We understand the many information challenges faced by teams on the ground.  We are glad to be able to provide support, both directly and via PDC’s extensive partner network developed through years of collaboration in the region and around the globe on the development and sharing of data resources.”

In support of the UN Emergency Telecommunications Cluster, representatives of PDC and the Naval Postgraduate School (NPS) deployed to the Philippines where they formed a Rapid Technology Assessment Team (RTAT). Using satellite-enabled, handheld devices, members of the Team collected data on communications infrastructure in Tacloban and surrounding areas. PDC then aggregated the data and distributed it to relevant disaster response practitioners by way of DisasterAWARE. The Team also developed networks to bridge communication gaps and establish a better communications infrastructure for disaster relief coordination.

Representatives from the Center for Excellence in Disaster Management and Humanitarian Assistance (CfE), the Multinational Planning Augmentation Team (MPAT), Harvard Humanitarian Initiative, and PDC Director of Disaster Services Dr. Erin Hughey recently returned from the impacted area where they collaborated on data collection for a rapid response assessment. Hughey said, “The immediate response efforts faced significant challenges that are being captured to increase the overall effectiveness of future response operations. It is important to capture both the successes and the challenges that have been experienced by such a remarkable group of people who have acted swiftly and with dedication to help the people of the Philippines.”

Hughey and her team have been activated for response since prior to the storms arrival in the Philippines, and have been working closely with PDC’s Applied Science and GeoInfo teams to release Haiyan response layers in the PDC decision support system, EMOPS. This work includes updating damage assessment layers for the affected areas, providing current information about damage to houses, infrastructure, and agriculture. 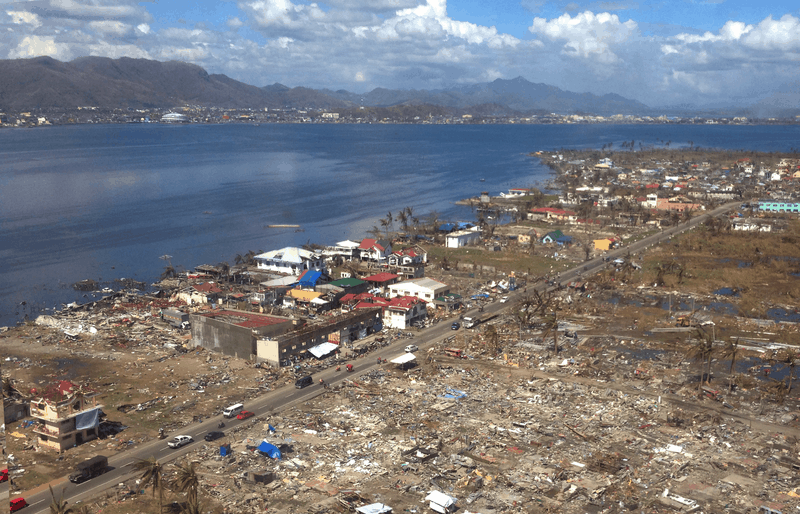